Half a Chance by Cynthia Lord 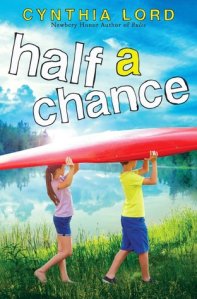 One of the books we were assigned to read was Ray Bradbury’s Dandelion Wine. It’s one of Bradbury’s lesser-known works mostly because it’s not science fiction. It’s a lovely coming-of-age story that takes place over the summer, loosely based on Bradbury’s childhood. It’s about all the simple joys of summer as a child: picking fox grapes and catching fireflies and wrestling with your brother on the soft grass and all that. Grown-ups love that stuff. But when we showed up for the first week of school with our summer reading assignments in hand and our English teachers asked us what we thought of it, pretty much every 9th grader declared this one of the lamest books they’d ever read.

“But it’s so beautiful!” our teachers exclaimed.

Sure, summer is beautiful. But we had just spent the last few weeks of our’s stuck inside reading this damn book and writing this essay about it, rather than running around and catching fireflies ourselves. What the hell?

I take you back to my 9th grade frustrations in this review of Cynthia Lord’s latest novel, Half a Chance because I think Half a Chance is basically Dandelion Wine, but not really in a good way.

Half a Chance is the story of Lucy and her small family of computer-something-work-from-home mom and famous photographer dad who just moved to some idyllic lake-side town in some idyllic northeastern state I don’t remember. Lucy is quite the photographer herself, and when her dad tells her about a contest for kid photographers that he’s judging, Lucy gets jealous and decides to secretly enter the contest herself so her dad will realize what a great photographer she is. Along the way, she befriends the boy next door who spends his summers at the lake and his family, who is dealing with his aging and ailing grandmother.

Half a Chance is, like Dandelion Wine, a sweet book. I’m sure a lot of people will see their childhood selves in the experiences Lucy has. But that’s the problem, I think these books are more appealing to adults trying to relive summers at the lake than kids who might me living them right now.

And then there’s the problem of kids who never have summers at the lake. My students do not have summer lake houses. Most of them spend summers at the local public park if they’re lucky, or trapped inside with the t.v. if they’re unlucky. I think they would have a terribly hard time relating to anything in this book. I worry that affluent summer experiences are over-romanticized in kid lit.

And finally, I just personally have a hard time getting behind books where the characters are super into a specific hobby and everything they do is filtered through that hobby. All Lucy does is take pictures and talk about how things are related to taking pictures. It’s not not that its unrealistic–you CAN relate just about anything to photography if you want to, and kids definitely get fixated, that’s fine–it’s that it’s just not that interesting. I had the same problem with Gayle Foreman’s If I Stay because of the music stuff. It’s all just too much.

But it’s unfair to not point out the things this book has going for it. There is clear, believable character development and conflict in the book.  Lord is very good at creating small problems and weaving them together into an interesting plot. It feels (mostly) realistic. (The whole photography contest thing her dad was judging I found a little annoying–of course his kid isn’t allowed to enter!!! But there was a subplot about tracking loons and the subplot about her new friend’s grandmother who is falling into dementia that are heartfelt and well-paced.) In realistic fiction I prefer a bunch of little problems floating around than one really big giant one. That’s how life is! Lord does that well.

Newbery prospects? Lord won the honor before for Rules. It’s on some Newbery contender lists on Goodreads. The librarian who helped me find a copy of this book said she loved it. Lots of people think this has a chance. I think this does have half a chance (Ha! See what I did there!) because of the character development and touching family story, but I kind of hope it doesn’t win for all the reasons I outlined. We don’t need more stories about summer at the lake. Step outside your comfort zone, Newbery!

One thought on “Half a Chance by Cynthia Lord”